Nneka Egbuna (born 24 December 1980) is a Nigerian-German hip hop/soul singer and songwriter. She sings in both Igbo and English. She is the daughter of an Anambra state- Igbo Nigerian father and a German mother. She was born and raised in Warri, in the Delta region of Nigeria, and went to the primary school of the Delta Steel Company, then the secondary school at the Nigerian National Petroleum Corporation. Nneka relished the experience of singing from an early age in her school and in the church choir. After relocating to Hamburg, Germany, at the age of 18, she pursued a career in singing alongside a degree in Anthropology. She now divides her time between Nigeria and Hamburg.

These photos were captured as Nneka and her band performed at the KUT showcase at the convention center during SXSW 2010. She had just released her third album, Concrete Jungle, in February, which was her first US release. Even though Nneka sings more than raps, she names hip hop as her primary musical root and most important source of inspiration, while citing artists such as Fela Kuti and Bob Marley as well as contemporary rappers Mos Def, Talib Kweli, and Lauryn Hill as key influences in her own pursuit of musical recognition. Her lyrics reflect much of her history and life in Nigeria as well as her time spent in Western Europe. Her songs stress the issues of capitalism, poverty and war and are often loaded with moral and biblical messages and references, with some music commentators comparing her to Erykah Badu, Neneh Cherry and Floetry. Excerpts from wiki: http://en.wikipedia.org/wiki/Nneka_(singer)
Read More 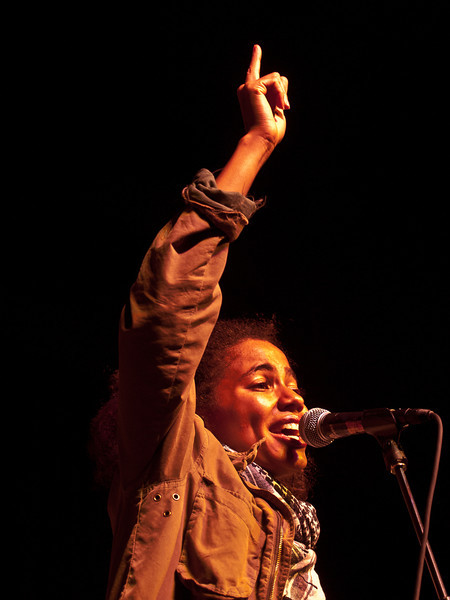