Kurt Vile (born 1980) is an American musician and producer, best known for his solo material and as a founding member of indie rock band The War on Drugs. Influenced by Bruce Springsteen, Pavement, Tom Petty, Beck and John Fahey, Vile began his musical career creating lo-fi home recordings with frequent collaborator Adam Granduciel in Philadelphia, Pennsylvania. The duo subsequently formed the indie rock band The War on Drugs, with Vile departing following the release of their debut studio album, Wagonwheel Blues (2008). Vile released his fourth studio album, Smoke Ring for My Halo, which significantly increased his exposure and achieved considerable acclaim from most music publications. From: http://en.wikipedia.org/wiki/Kurt_Vile

Kurt Vile broke out this year with Smoke Ring For My Halo, an album that highlights the Philadelphia songwriter’s fractured folk-rock. Vile took to the Austin Ventures stage Friday evening with just an acoustic guitar, focusing on the folk aspect for the first half of the set. But with his backing band the Violators in tow, he appeared to get more comfortable as the sun wound down. Songs like “Hunchback” and “Ghost Town” benefited immensely from the three-guitar assault, while “Freeway” blasted off with ragged energy, eliciting cheers from the mixed crowd of hipsters and Baby Boomers. Vile’s baritone easily cut through the feedback, and his breezy nature was pretty infectious in the similarly breezy evening. - Art Levy @ http://kut.org/2011/09/acl-review-photos-kurt-vile-and-the-violators-friday-austin-ventures/
Read More 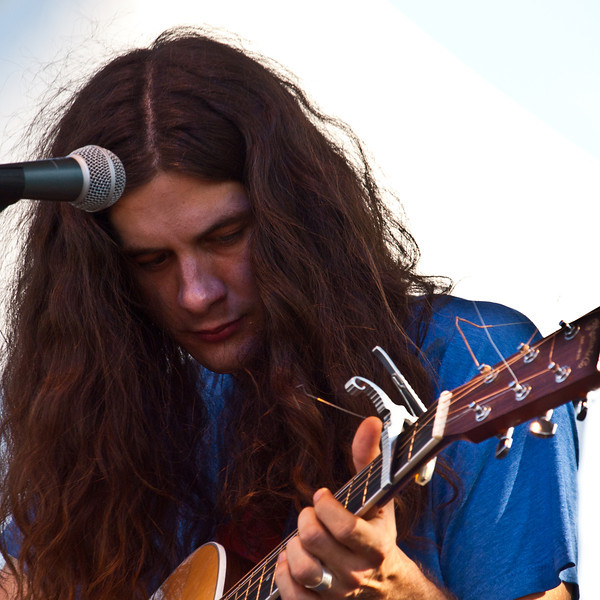 Kurt Vile
with his band The Violators
on the Austin Ventures Stage
at the 2011 Austin City Limits Music Festival
Friday evening, September 16, 2011
Photo by Sean C. Murphy, ©2011
Please do not reproduce without permission.